The head winemaker at Montalto has some career advice, whether you’re looking to enter the wine industry or not. 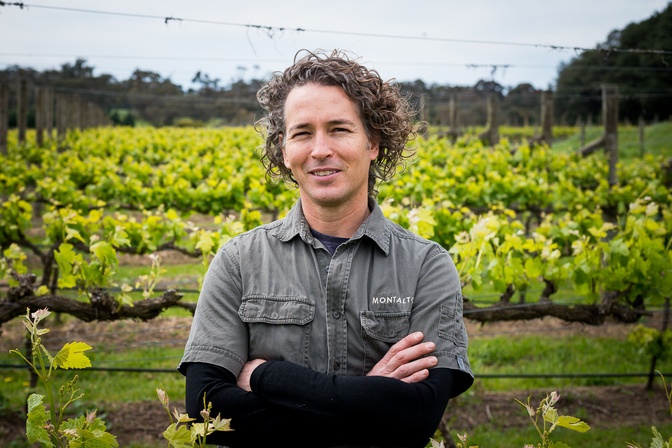 It was during a 10-week harvest among the rolling hills of Burgundy, France, that young winemaker Simon Black learned his most significant career lesson.

He was working under Domaine de l’Arlot winemaker Jean Pierre de Smet. As well as making wine, the team was responsible for picking the figs, pears, apples and hazelnuts from the kitchen garden.

“He showed me how important it was to care for and use the resources at our disposal,” says Black, now head winemaker for Montalto Vineyard and Olive Grove. “One day Jean and I were collecting figs together when I threw one away because it had a bird peck in it. He picked it up, cut out the bird peck and put it back in my hand.”

The experience changed his approach to winemaking. Until then he had studied other wines and wondered how he could make his wine more like them.

“Now I look at the raw ingredients available to me and appreciate them for exactly what they are,” he says. “No one else has my grapes, my little patch of dirt or the uniqueness of my own site. And I want my wine to taste like my wine.”

Winemaking wasn’t Black’s first choice, but it quickly became the obvious one. After transferring from his sports science degree – “the path was leading towards PE teaching” – he enrolled in winemaking at Charles Sturt University. It was a natural progression after growing up the son of a restaurateur.

“My first job was in Dad’s restaurant with my two brothers, prepping the starters,” he says. “We got an early exposure to food, flavours and textures. As I got older, wine became the next fascination.”

Along with the French harvest he spent time after university exploring wine regions to learn techniques and hone his flavour profiles. He worked vintages in the King Valley, Hunter Valley, Rutherglen and the Yarra Valley, among others.

“I’d recommend getting as much exposure to as many different regions and styles as possible – that’s how I figured out where my best fit was,” says Black, whose love of cool-climate pinots and chardonnay eventually led him to the Mornington Peninsula, a region synonymous with these styles.

Through hard work he built steady contacts, and with good timing on his side he landed his first job building Willow Creek Vineyard in Mornington.

“It was a pretty bold appointment; I had very limited experience,” he says. “But I’ve found that while young winemakers may lack experience, if they’ve got the right energy and drive, and they’re willing to learn, they can impress just as much, sometimes even more.”

As he quickly found out in that first position, a winemaker will always have work to do. As well as the chemistry side, Black can be found receiving fruit, dragging pumps, working with distributors and marketing his product. During harvest he’ll often clock on at 4.30am for a labour-intensive 12-hour shift. Last year he worked 56 days straight.

“Winemaking is like raising kids,” he says. “You can’t just go home if you can’t be bothered. That’s like saying you’re not going to feed your kids tonight. You have to give it the attention it needs to get the best out of it.”

As with children, the vines demand a different kind of nurturing as they grow older. “The goal posts move every season, and winemakers need to be adaptable because you’re always at the mercy of the elements,” he says. “You can’t treat a two-year-old the way you treat a 10-year-old.”

Black has continued to test and push himself throughout his 23-year career, be it with new blends, innovations or processes. To keep the creative levels high he’s a regular at industry conferences and gatherings.

“You have those invaluable conversations around the bar where you share stories and information, and at gatherings you taste other wines and get feedback on your own profiles,” he says. “You have to feed the fascination, which only ever gets greater.”